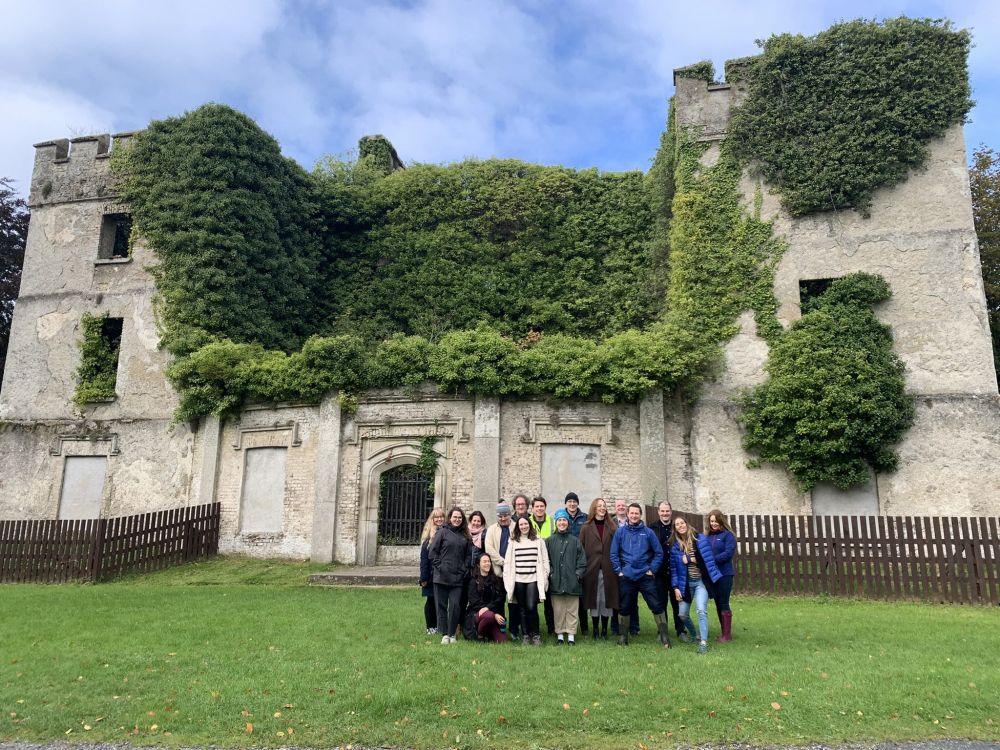 The Autumn School at Maynooth on Our Future in Forestry was a lively three days of education and cultural connection. The conference combined research with industry, and both with a tether to place and a thread that bound two cultural contexts to how forests should be considered in relation to human health. Discussions wove between current and future lines of inquiry at the intersection of forests and wellbeing, peppered with the color of Finnish and Irish proverbs – expressing a connection where no other words would do.

Launched by a tour of Maynooth’s award winning green campus, the opening day proceeded with addresses from the President of Maynooth and Maynooth’s very own Finnish connection, Professor Eeva Leinonen, the Finnish Ambassador to Ireland, H.E. Ambassador Raili Lahnalampi, and the Minister of State, TD Pippa Hackett. A heartening welcome to the event that highlighted the relationship between Finland and Ireland and set the tone for the collaborative and cross-cultural learning environment.

Convened by Dr. Tadhg MacIntyre, we next learned from Finnish perspectives in forestry and identified areas of synergy and dissonance within the Irish landscape, pinpointing opportunities for the future of Ireland’s forests. The discussion was presented by Dr. John Devaney of Maynooth’s Department of Biology, Dr. Jenni Simkin from LUKE – Natural Resources Institute Finland and Daithí DeForge with Coillte.

Immersed in Nature
Feeling the briskness of an Autumn Irish morning, we gathered for an excursion to Donadea Forest Park. Donadea is local to the Maynooth area and managed by Coillte. The 20-minute commute by car hit home previous discussion points on the need for a future focused on improving forestry access in Ireland to support local biodiversity and human health.

In the early 1900’s Ireland was reduced to 1% of forest cover and today has made a come back to 11%, with goals from the Government of Ireland being to increase forest cover 18% in the coming decades. Sustainable forestry groups, such as Coillte, set further targets for 2050 to increase the sustainable forests under their management by 100,000 hectares (or 100,000 football pitches).

Within Donadea, we learned from Coillte’s local park ranger, Mark, and gained firsthand experience with the awe, rejuvenation, and connection that forests can provide. Beyond the boost to mental health, we learned about new approaches to forest management, such as Continuous Cover Forestry (CCF), and challenges to biodiversity, such as the imported diseases that are currently decimating Ireland’s Ash population. Time at Donadea set the foundation for further discussion for the day, posing questions about biodiversity, access, and issues of diversity, equity, and inclusion in sustainable forest management.

The conference followed with presentations by Dr. Deirdre O’Connor of UCD presenting on the Multi-functionality in Forest-Scapes and presentations from University of Derby’s Prof. David Sheffield on nature connectedness and compassion.

3, 3, and 33
Day two wrapped with panel discussions and presentations on future opportunities at the intersection of forestry in health. We divided into groups to co-create and share innovative ideas on what we could do next to carry our learnings forward. Making commitments, we collectively used the idea of 3, 3, and 33 – committing to action items we could see to fruition in the next 3 weeks, the following 3 months, and ultimately making larger changes within the subsequent 33 months.

Training as an Early Career Researcher
While many researchers and participants said their goodbyes, the final day lent itself to a smaller ecosystem of early career researchers investing in further training. Beginning with Dr. Dermot Lynott, we were asked to consider the divergent interests between making a name for ourselves in academia as a high impact leader and staying committed to sound research practice. Dr. Lynott presented an engaging and thought-provoking discussion on Seeing the Forest, Not the Trees and how we can leverage open science to improve research.

The day continued with Dr. Ronan Foley on the impact of blue space as well as green and Dr. Evi Petersen on being solo in nature – opening our eyes to further future pathways as early scientists in Environmental Psychology and related fields.

The closure of three days of collaboration and nature connection was led by Alan Scarry, a GoGreen Routes doctoral candidate from the University of Limerick, as we endeavored to map our future career pathways. We shared our reflections and designs for our futures to determine synergies and launch ever evolving relationships.

Go n-éirí an bóthar leat
At the end of three days, we departed with few goodbyes, but rather with next steps, new ideas, opportunities to follow up, and heartfelt well wishes for our collaborators – embracing the feel of the Irish proverb on our tongues. Go n-éirí an bóthar leat – May the road rise to meet you, too.