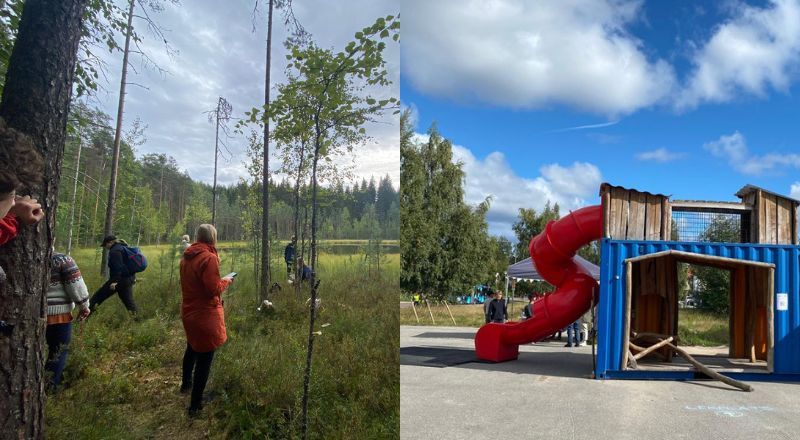 In early September, Cultivating cities Umeå (Sweden) and Lahti (Finland) held their Seedbed Interventions, temporary interventions co-created with local stakeholders and joint experts. Both municipalities are seasoned in involving their residents with local initiatives. Umeå, for instance, has a great relationship with local pre-schools and regularly checks in on the needs of families in the community. The city also works quite closely with mainstreaming gender in the environmental policies it drives forward.

Lahti also is a champion in involving its citizens in environmental initiatives. The city's strong approach to sustainability led to its nomination by the European Commission as the 2021 European Green Capital. Lahti also is highly involved in championing the concept of “planetary health”. Over the summer, the municipality held a unique summer school, which involved students with hands-on work on case studies and planning on the subject.

Umeå's pop up playground
On the day of Umeå’s Seedbed Intervention, stakeholders met and assembled a pop-up playground among other brainstorming activities meant to help residents envision the kinds of nature-based interventions they envisioned for their community. The weather was fantastic and the turnout was excellent, with many people coming in to help move piles of soil, sweep asphalt, build tents, a stage and decorate with flowers. Participants ranged from the municipality, local English school and pre-school to companies like Volvo and UMA. The municipality felt happy to create something positive for residents. There were some challenges on the day. The electricity dropped out, for example, and some colleagues unfortunately could not attend due to illness.

Overall, the results from the survey, and input gathered during the brainstorming sessions (in the form of writing and drawing) were positive. Many were grateful that the pop up playground would stay assembled until winter time. Examples of requests for the future NBS intervention included: places for children and families to play, meeting places for exercise, more flowers in the city and a park for pollinators to increase biodiversity and provide a place to collect berries. As a next step, a contractor will begin preparations to reconstruct a local street and the municipality will procure more green spaces for residents.

Lahti's health forest
Lahti’s Seedbed Intervention was similarly a great success, with dozens of volunteers from the local hospital staff and two main participant groups. Cooperation with university partners facilitated the events that day. The intervention in Lahti, in contrast to Umeå, involved a pilot study at the local Kinterö forest, where nearby hospital employees are breaking ground in using green space to create better the health of patients.

Among the two groups participating in the intervention, one group was taken on a guided sensory tour of the forest, while the other group walked in silence. It was then observed if each respective group had a different experience walking along the route. On the guided tour, participants were encouraged to hear, smell, touch and see the forest. One participant was overcome with emotion, for example, when she took the time to really feel the bark of a tree, a new and healing experience for her. All in all, these activities carried out in the forest were noted as beneficial for participants and the health forest will be carried out further in Lahti. The local hospital plans to meet to discuss the future of the health forest. The potential for collaboration with virtual reality is also under discussion.

The group actions in Lahti and Umeå are excellent examples on how locals and experts can co-create together on Nature-based solutions. In their respective localities, those involved in the Seedbeds expanded their horizons on nature-connectedness.

Lahti, Umea by "Shreya Utkarsh", licensed under some rights reserved, for promotion