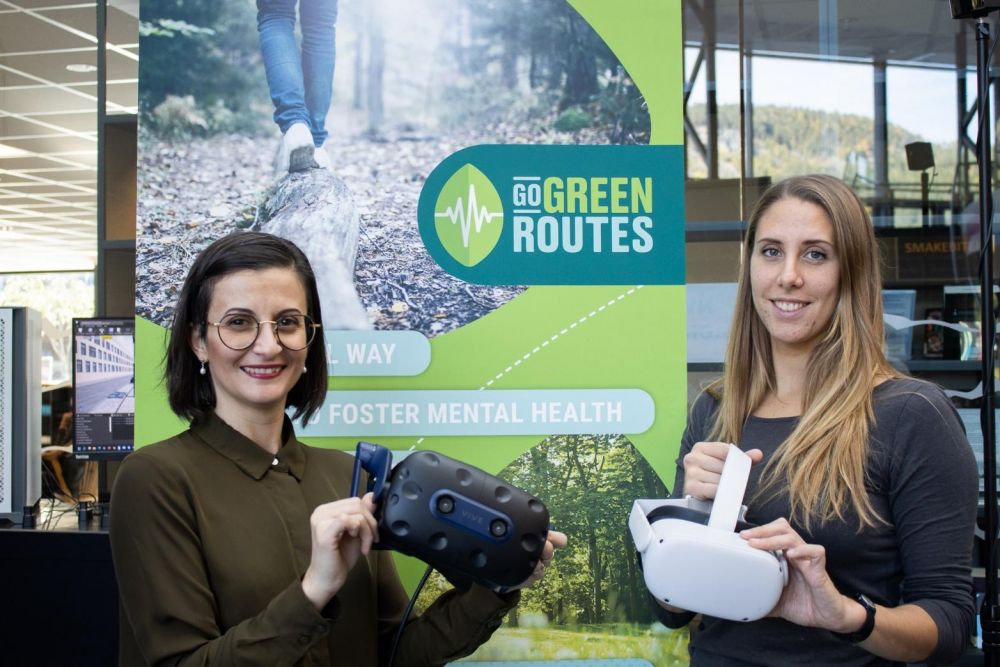 A team of researchers at the Inland Norway University of Applied Sciences (INN) and the University of South-Eastern Norway (USN) is leading the development of the VR experimental showcase, and will coordinate the roadshow across the Cultivating Cities.

After its online launch this summer, the VR Experimental Showcase was presented to the public during a series of kick-off arrangements in three Norwegian cities, under the umbrella of the Norwegian national event Forskningsdagene (“Days of research”):

Interview with Prof. Giovanna Calogiuri, task coordinator, at the event in Elverum

The VR Experiential Showcase uses state-of the art technologies and devices, powered by a high-performance computer. It is developed by a highly transdisciplinary team composed of a 3D artist (Fred Fröhlich, Associate Professor), a computer scientist (Ole E. Flaten, Ph.D. candidate), and a sport physiologist (Sigbjørn Litleskare, Associate Professor), who worked together to ensure a highly realistic and physically engaging experience for the users. Special motion sensors placed on the body allow people to explore the environments by actually moving in it, almost like they would do in the real world. The effect is surprisingly realistic and highly immersive. The installation is also highly accessible and inclusive: people can also explore the virtual world even sitting down, and operating the motion sensors through a variety of adaptable solutions.

Through the VR Experiential Showcase, people can immerse themselves in a fantastic world: the experience commences in a city setting (a 3D reproduction of Hamar), but they will soon encounter a magic portal, which can take them to a fascinating parallel dimension where nature took over the city. People can explore and interact with this fantastic world, engaging with the tall trees, the complexity of the grass and the undergrowth, the calm sounds of birds and more.

The virtual experience symbolizes how the natural world is intrinsic to our lives and living environments and, at the same time, reminds us of the importance of appreciating the local green spaces and nature views in our cities to get away from our daily hassles and connect with our most inner selves. Even just the view of a flower growing through the concrete, or a ivy on a wall, can provide us opportunities to connect with nature.

The kick-off events
The VR Experiential Showcase was exhibited between 11:00 and 16:00 at three University Campuses, which are also a meeting place for local citizens visiting the library, mingling at the cafeteria, using the sport facilities, etc. A large part of of the participants were passing by university students, campus employees, or other visiting citizens, but many participants came specifically to experience the VR installation, attracted by the advertisements that circulated on the Universities’ webpages and social media in the previous days. In total, 83 people (43 women, 39 men, and 1 non-binary person), of age ranging between 18 and 73, engaged with the VR experience. Most commonly, the participants described the experience as “Exciting” or “Fun”, but many also depicted it as “Soothing” or “Pleasant”. Some praised the technology as “Realistic” and “Immersive”, though some appeared less impressed, reporting how the virtual world seemed “Artificial”, or mentioning other technology-related challenges such as the “Unnatural walking” or the feelings of “Dizziness”. Nevertheless, as indicated by a brief survey, most of hte participants agreed that the experience made them feel more connected with nature, and a large majority reported that they enjoyed the experience.

The VR experiential showcase is ready to hit the road across the cultivating cities
The roadshow will initiate in spring 2023, with the VR installation being displayed in all the Cultivating Cities starting from Lathi (Finland), and them traveling through Tallin (Estonia), Umea (Sweden), Burgas (Bulgaria), Versailles (France) and Limerick (Ireland).

All citizens (youngers, adults, and elderly) can participate, and experience a walk in our fantastic virtual world.

Giovanna Calogiuri, Professor in Health Sciences, is the coordinator of the VR Experiential Showcase task within GoGreenRoutes. She is primary affiliated at the Center for Health and Technology, with a Chair position at Drammen City Municipality, at the University of South-Eastern Norway. She also have a adjunct position and the Department of Public Health and Sport Sciences, Inland Norway University of Applied Sciences.